Lately when I’ve been traveling, I’ve been staying in hotels and after a day of exploring, it feels nice to return to a room with a big fluffy bed, complimentary toiletries, television, and sometimes even a bath tub. However, if I always stayed in a hotel, the price of my trips would go over budget.

The first travel hack I want to share with everyone is something I’ve recently started using more often – this hack will help you save some extra dollars on hotels. There are tons of online travel sites and travel meta search engines that help you find the cheapest price of a hotel. That is always a good way to start looking for hotels in a certain area. If you want to dig a little further, go to Priceline and search for the city you’ll be traveling to. Like other online travel sites/agencies, it lists hotels in the city you searched for. Along with that, Priceline also offers “Express Deals”. These “Express Deals” are  hidden hotel deals. When you book one of these deals, Priceline doesn’t show you which hotel you’ve booked until after the booking has been completed. Because it’s hidden until you’ve actually booked, the rate per night is a lot lower than it would be if it wasn’t hidden. 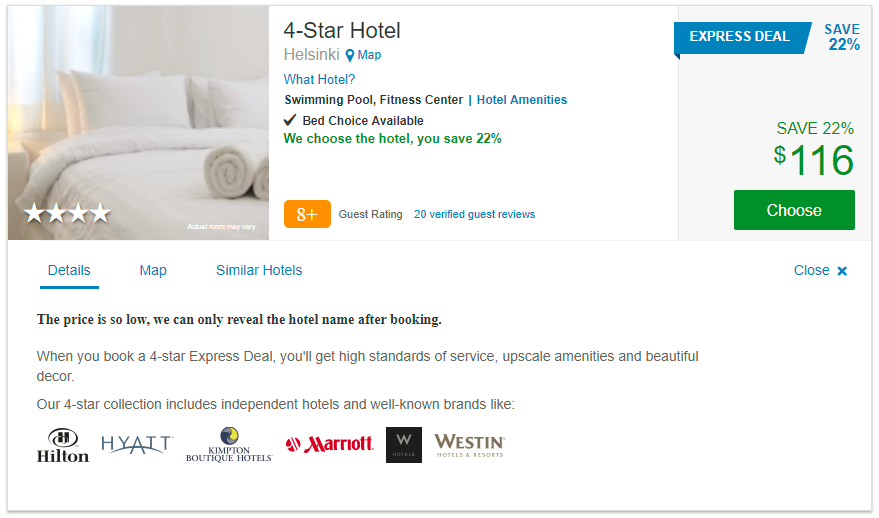 The Travel Hack:
Personally, I would like to know what hotel I’m booking. I’d rather spend a little more to know what hotel I’ve chosen or pick a lower star rated hotel for around the same price. However, if you want a sweet deal for a luxurious hotel, there’s a way to be 95% sure which hotel is the hidden hotel deal. The hotel offered as the “Express Deal” is also shown in the full results (not hidden), but at a normal rate. To figure out what hotel is behind the hidden deal, filter for the neighborhood, amenities and star rating on the left hand side to match the details of the hidden deal, and compare to the remaining non-hidden hotels. 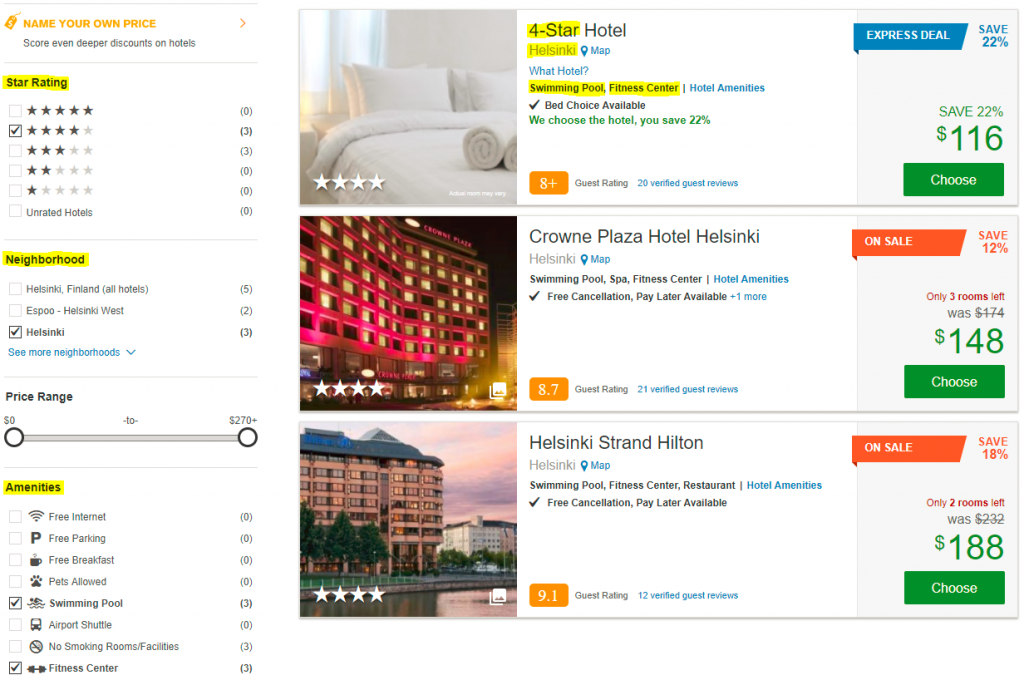 If it’s a good day, you’re only going to see one other result next to the hidden deal. That one hotel result would be the hotel hidden in the deal – yay! In the example above, there are two hotel results that match the hidden deal. How do we figure out which one it is? Both hotels in the above image look great and I probably wouldn’t mind staying in either. However, if you have a similar personality to me and that 50% chance of not getting the hotel you prefer to stay at or just not knowing bothers you, the next step is to look at the price of the hotel. The hidden 4-star hotel is $116 and it states that booking through the “Express Deal” will save you approximately 22% from the regular price. Helsinki Strand Hilton is $188 and with a ~22% discount, the price should be around $147. The Crowne Plaza Hotel Helsinki is $148 and with a ~22% discount, the price should be $115. The 4-star “Express Deal” would be the Crowne Plaza Hotel Helsinki because the discounted price matches that of the deal.

Hope this travel hack/tip helped! Feel free to reach out to me if you have any questions or there are any other topics you would like me to cover. Happy Priceline “Express Deals” booking!