2019 went by incredibly fast. It honestly felt like I just wrote my “Top 10 favorite travel moments in 2018!” post! We’ve  been waiting to travel around the west coast when we moved to California as there were tons of places we wanted to visit on this side of the United States. We moved mid year 2018 and started exploring near the end of the year. 2019 was a lot of west coast exploring, along with destinations in Europe and Asia. It was truly difficult keeping it to the top 10 moments, so I overruled the 10 rule. Below are my top 15 favorite travel moments this year in no particular order: some “wow” moments and some just fond memories.

1. Watching the most amazing sunrise at Moraine Lake: from a cloudy sky to a pink sky then an orange sky and finally, a rainbow appeared!
Banff National Park has always been on bucket list since we lived in New York, but we’ve been holding off visiting since we assumed we would be moving to the west coast one day. Banff National Park in Canada is beautiful, filled with blue/turquoise lakes. Although it’s a bit touristy, the amount of people in each spot did not take away from the beauty of the Canadian Rockies. We arrived past midnight in Calgary and drove 2+ hours to Lake Louise. We arrived at our hotel at around 3:00 am, took a shower and set an alarm for 4:30 am to get up to watch the sunrise at Moraine Lake. Once the Moraine Lake car park gets full, they no longer let people in. We arrived at Moraine Lake a little past 5:00 am and took a quick power nap. We climbed up the moraine and found a nice spot to watch what might be the best sunrise I’ve seen to date. The sun broke through the clouds and it went from a light pink sky to a light orange sky. Suddenly, a rainbow appeared and it was beautifully sitting above the mountains and turquoise lake. Soon after, it started raining. What an amazing moment! 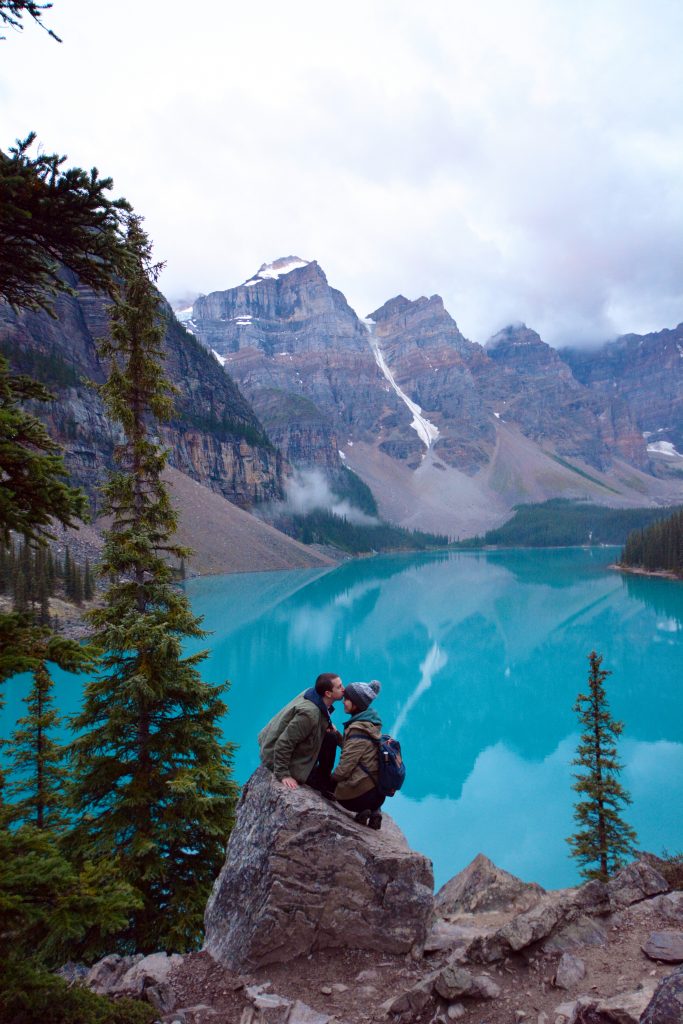 Right before the sun hit the mountain and clouds 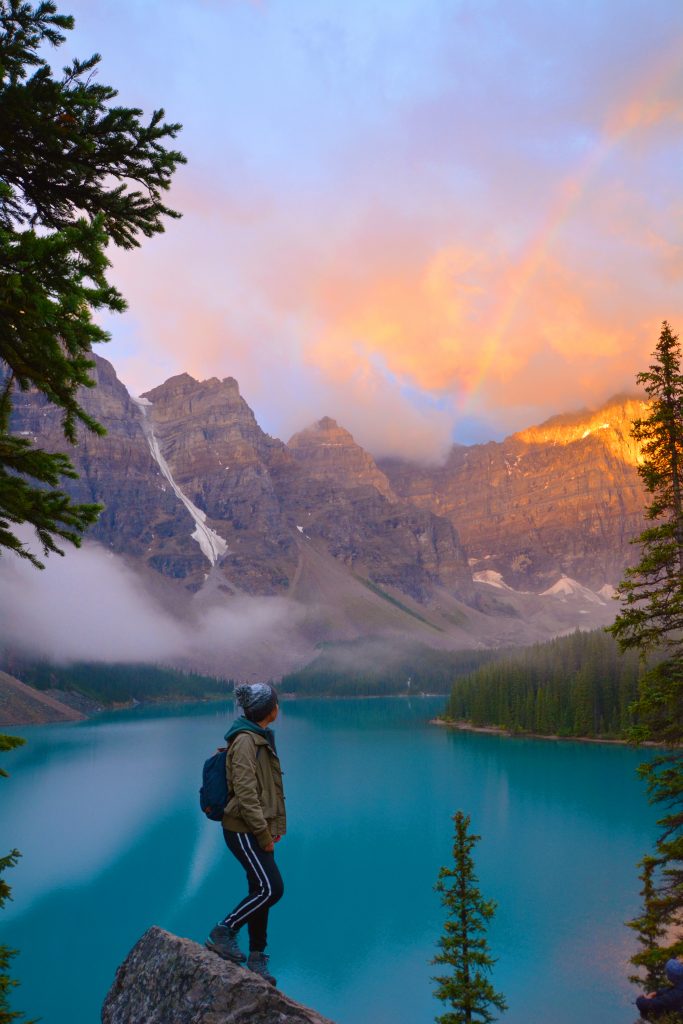 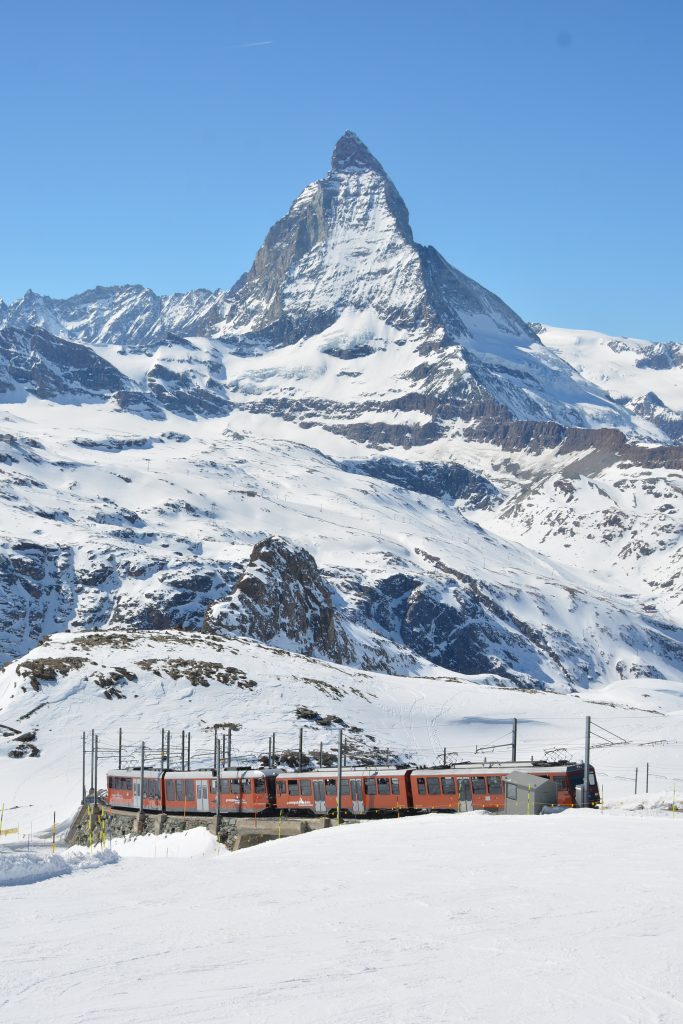 Matterhorn and the train 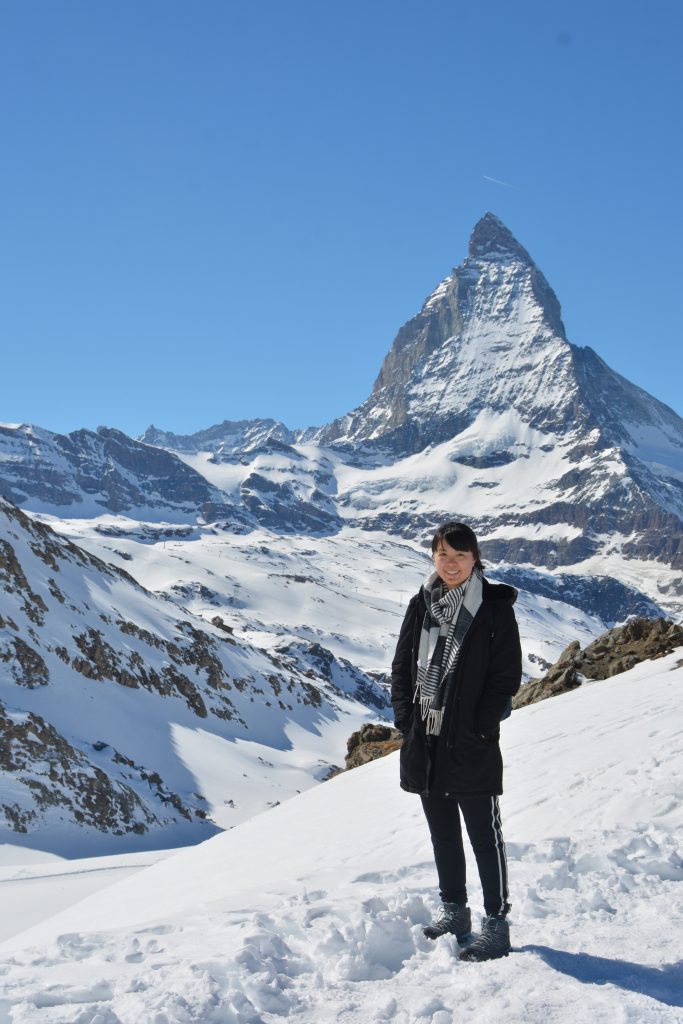 Thanks to the girl that took this picture for me!

3. Running around with dogs at Cannon Beach, Oregon
At first, Dustin didn’t want to drive from Portland to Cannon Beach because its a 1.5 hr drive away, but I really wanted to see the coast and the Haystack Rock. I somehow convinced him and it was absolutely worth it. The beach was huge, the sun was starting to set and there were tons of dogs running around. The sand that was had a layer of ocean water on top of it was creating a beautiful reflection. We love cold days on the beach 🙂 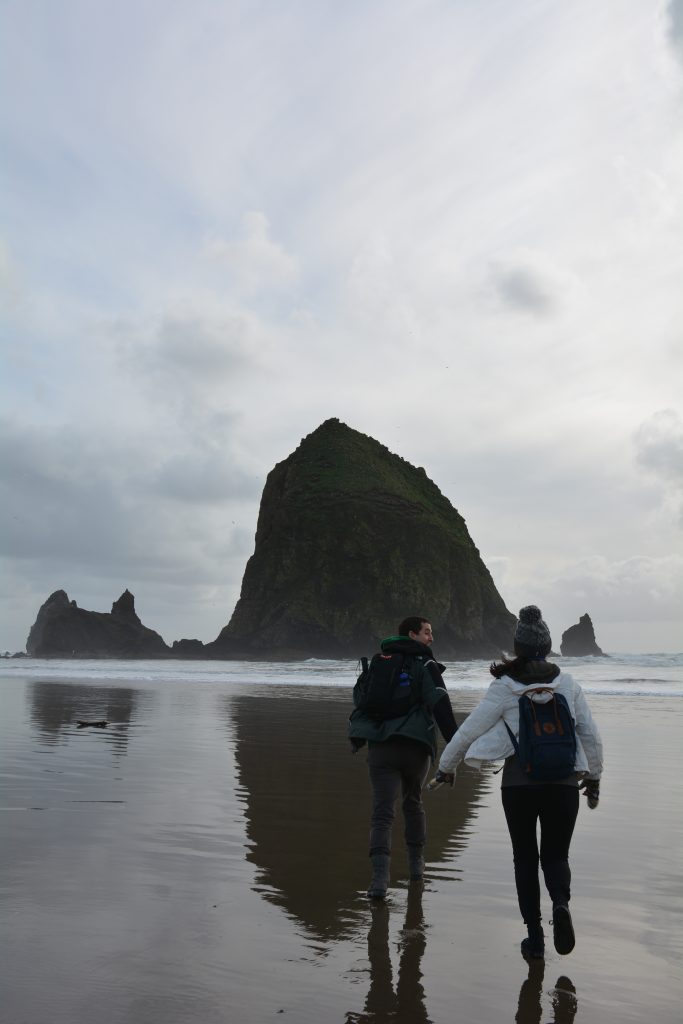 We almost didn’t drive to Cannon Beach because it was a bit far, but it was absolutely worth it! 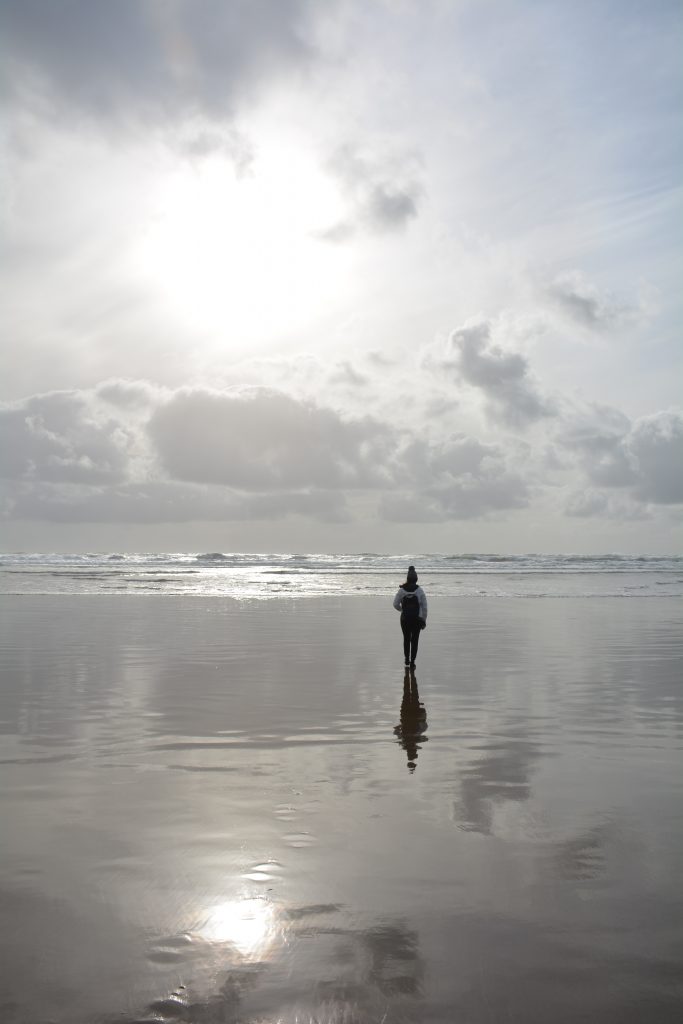 4. Hiking a unpaved and rocky path to Abiqua Falls, Portland
We weren’t sure if the path to Abiqua Falls was safe to hike since it was winter/spring time when we visited. The drive to the trail head was extremely rocky, but fortunately, the car rental gave us a Nissan truck. The hike wasn’t long, but it was tough – rocky, slippery, and the river water was strong (high tide), which means there wasn’t a lot room to hike next to the river. Through the slightly treacherous terrain, we finally turned a corner and saw Abiqua Falls, a hidden gem. The natural columns surrounding the waterfall made it an amazing sight to see. 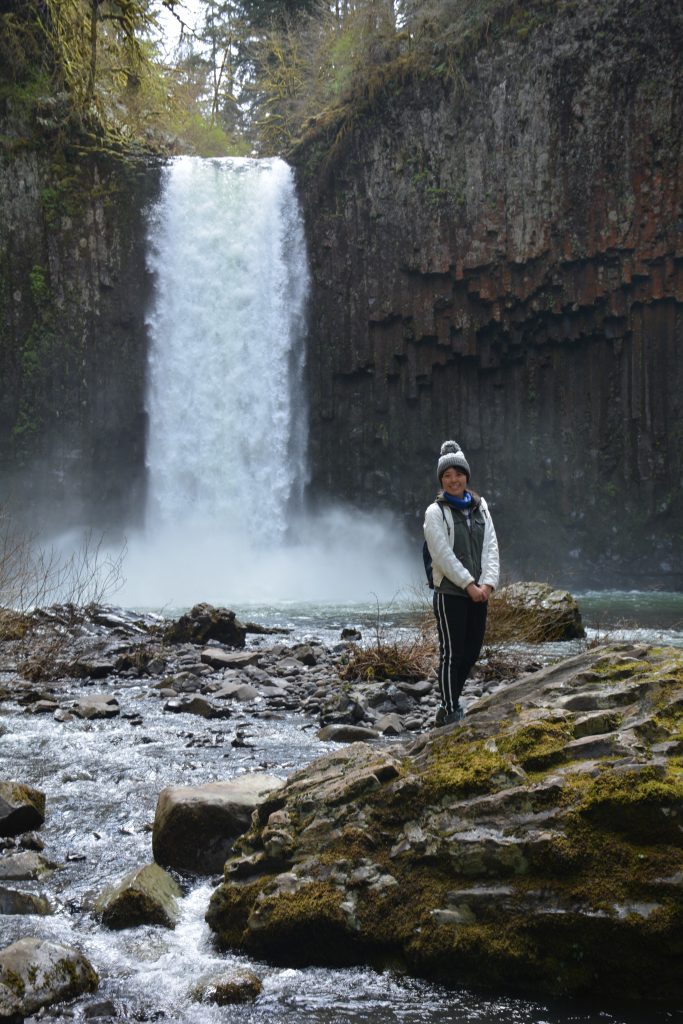 The waterfall was strong the day we went 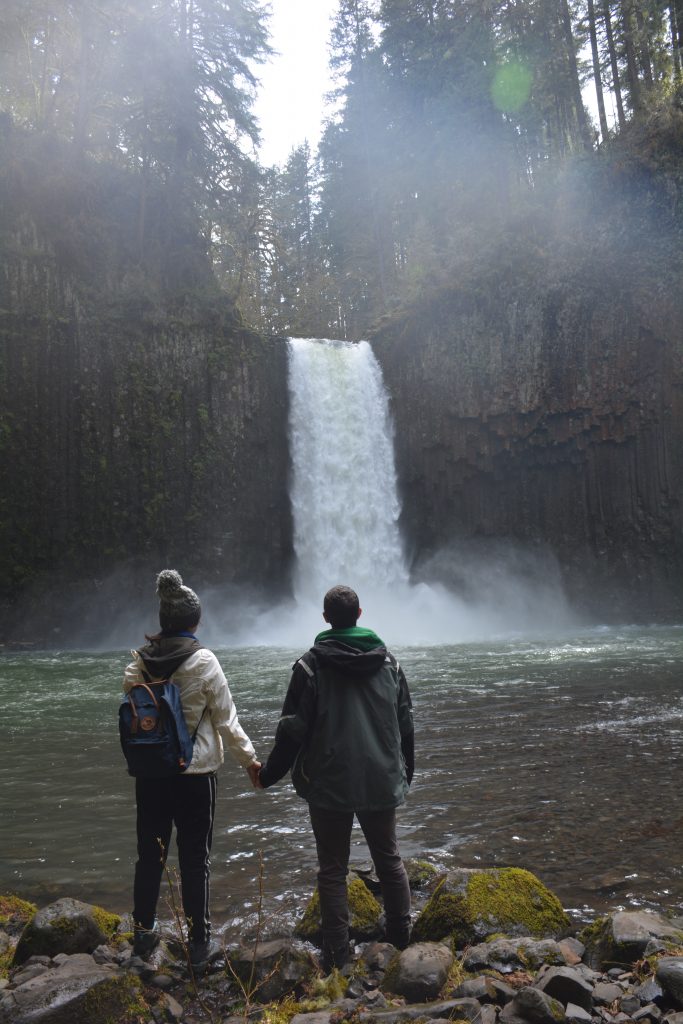 Me, Dusty, and Abiqua Falls

5. Traveling to Switzerland with Dustin, Part I: Eating dinner by Lake Zurich while watching the sunset on a summer night
For the last few years, I’ve always visited Switzerland on my own because it has always been for business. For the very first time (and the best part of the year for Switzerland), Dustin came as well for a few days to spend the nights and weekend with me. On our first night, we could see the alps from Zurich, which only happens on a clear day. We order take out from one of my favorite restaurants in Zurich and sat on a bench next to the lake to watch the sunset and enjoy dinner. 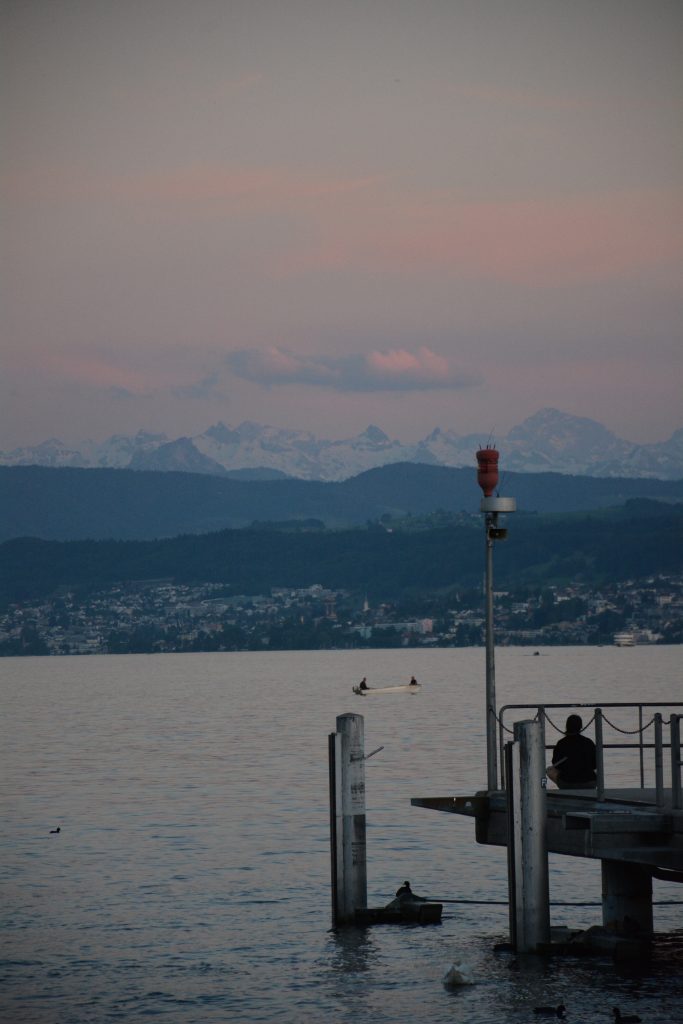 Lake Zurich and the Swiss Alps 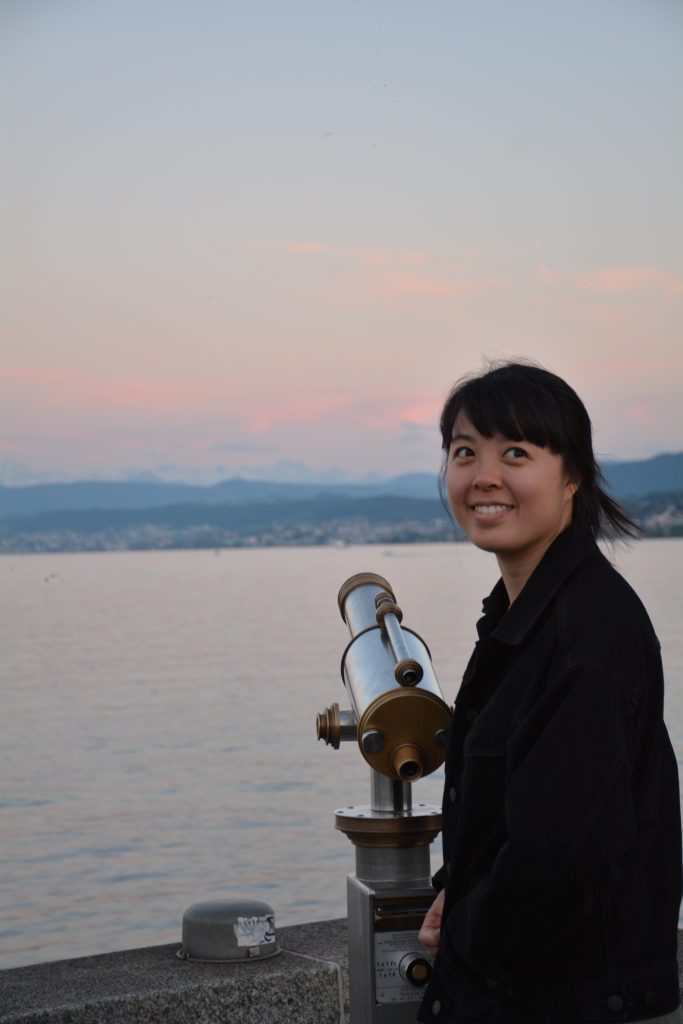 6. Traveling to Switzerland with Dustin, Part II: Hiking in Appenzell & Swimming in an emerald green glacier river in Lavertezzo
On the same trip as above, we packed our weekends with a lot of Swiss excitement! We went hiking on a nice summer day to Appenzell (Seealpsee, Ebenalp, Aescher House) on Saturday and than swam in a emerald green glacier river in Lavertezzo on a Sunday. I loved sharing the Swiss experience with him, both activities I had not done before either and had always wanted to do. 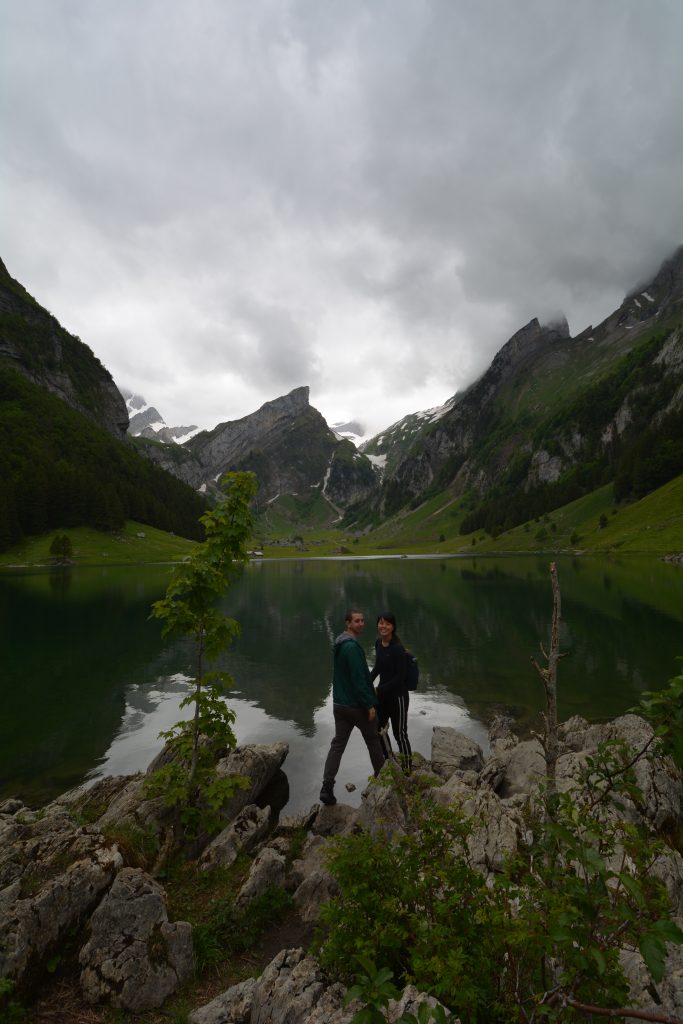 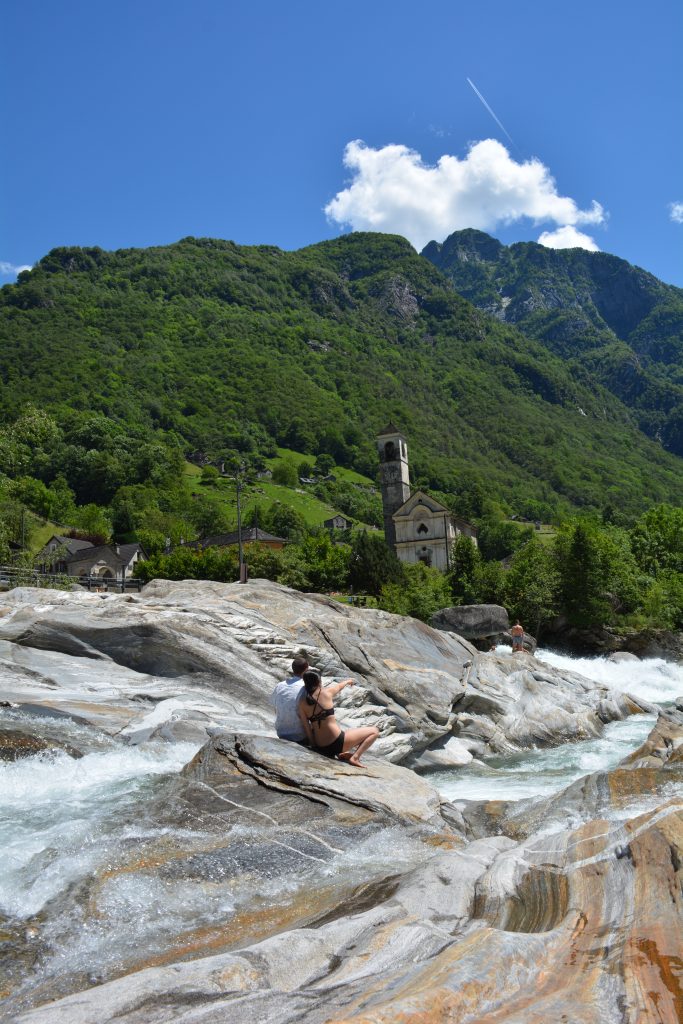 Enjoying the views at Lavertezzo

7. Visiting home: Singapore
It’s always great to come home. In Singapore, there’s always something new whenever I visit after half a year. I spend my time here relaxing, seeing new sights, rediscovering old ones, and enjoying the delicious food Singapore has to offer! 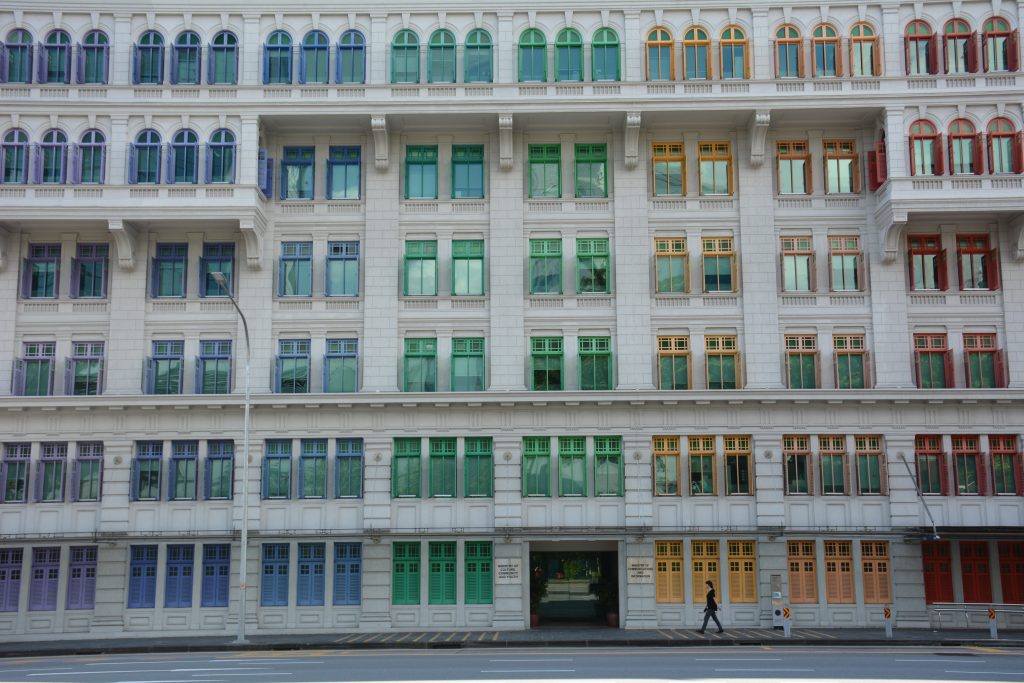 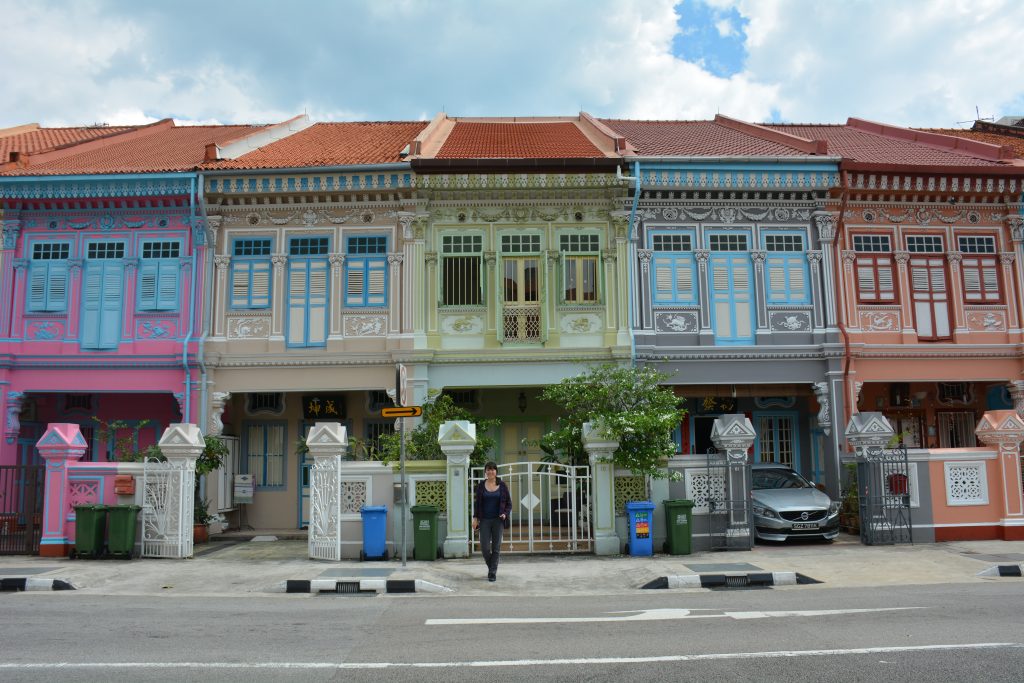 Several different colors on this road of shophouses 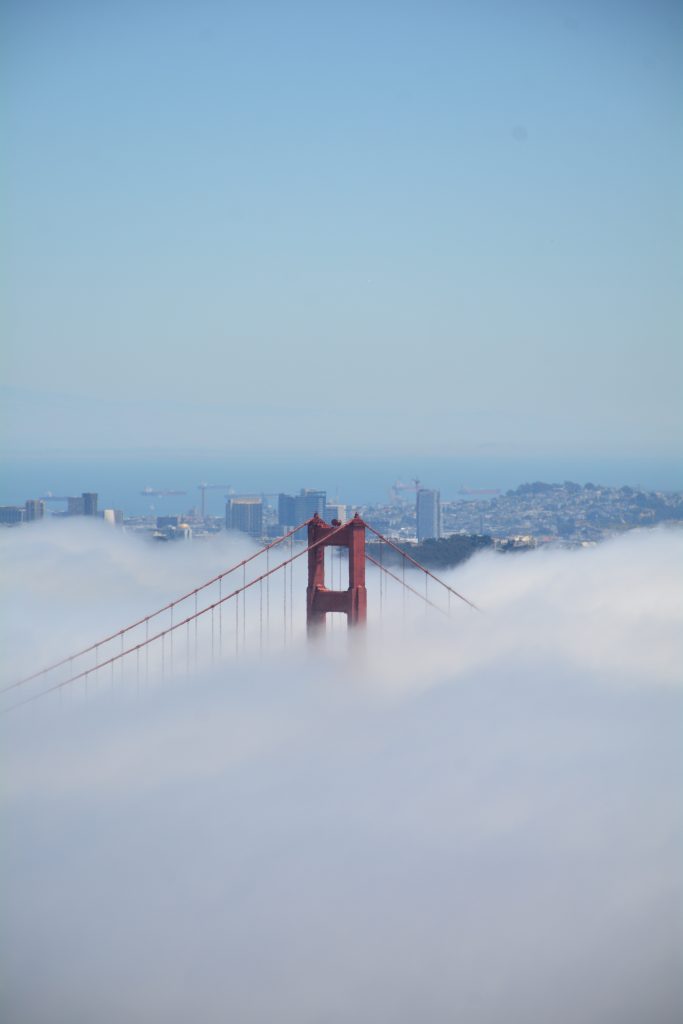 One of my favorite pics – low fog and the Golden Gate Bridge! 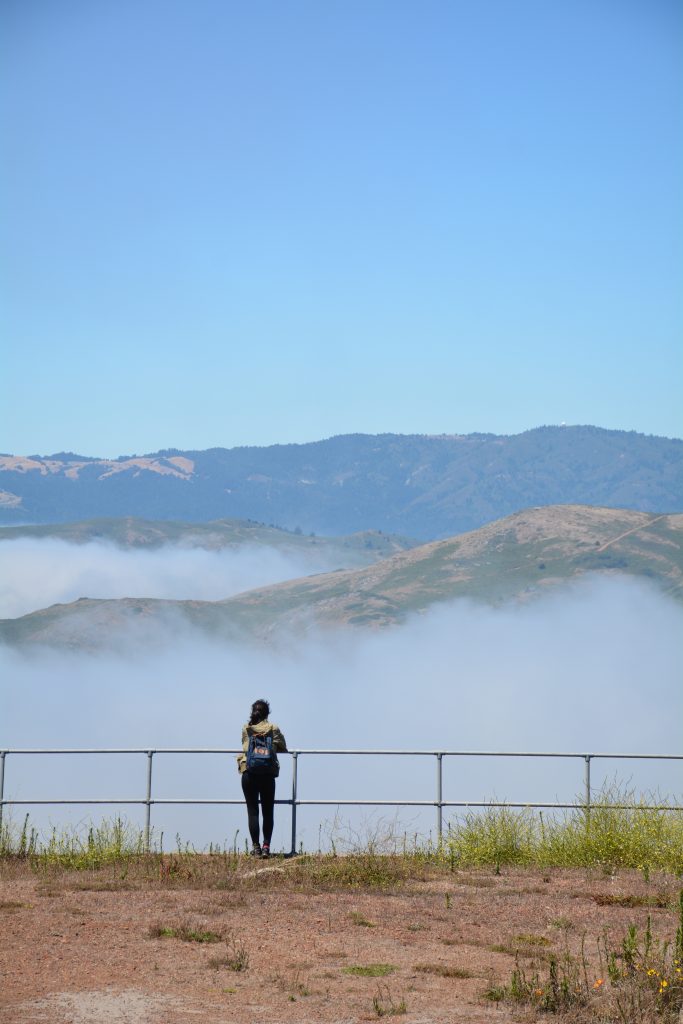 9. Seeing the Milky Way at Joshua Tree National Park
We spent one day in Joshua Tree National Park and enjoyed every minute of it: climbing the large rocks, running around fields of Joshua Trees, and watching the sunset above Coachella Valley. However, one of the most memorable moments for me was after we watched the sunset. We parked somewhere with an open view of the sky and started to see all the stars appear. Through a camera, we saw the Milky Way! 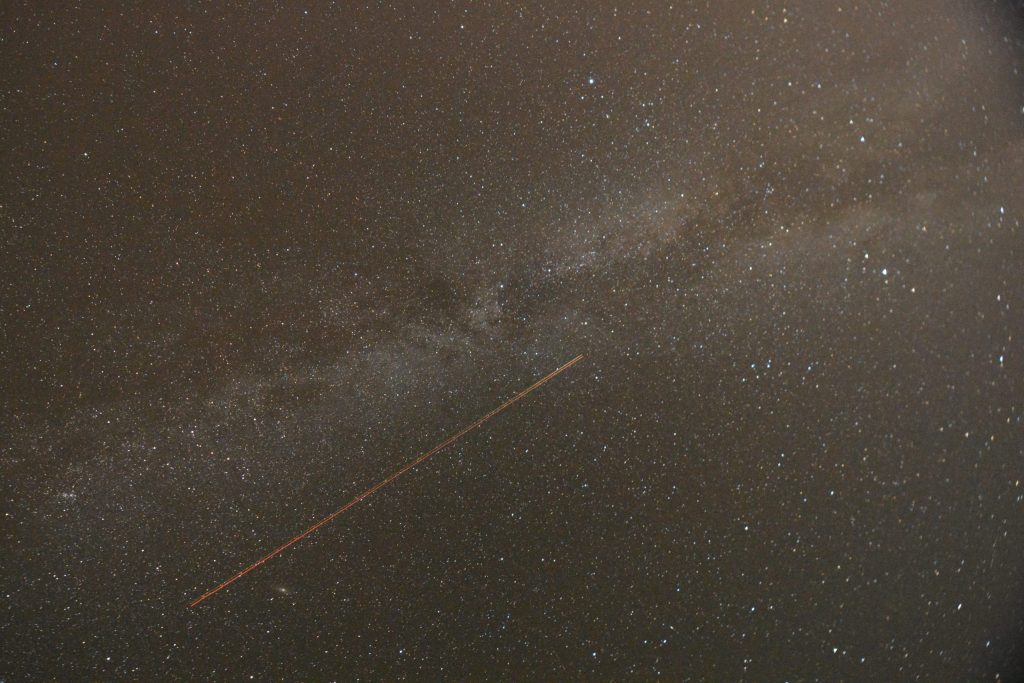 The Milky Way at JTNP 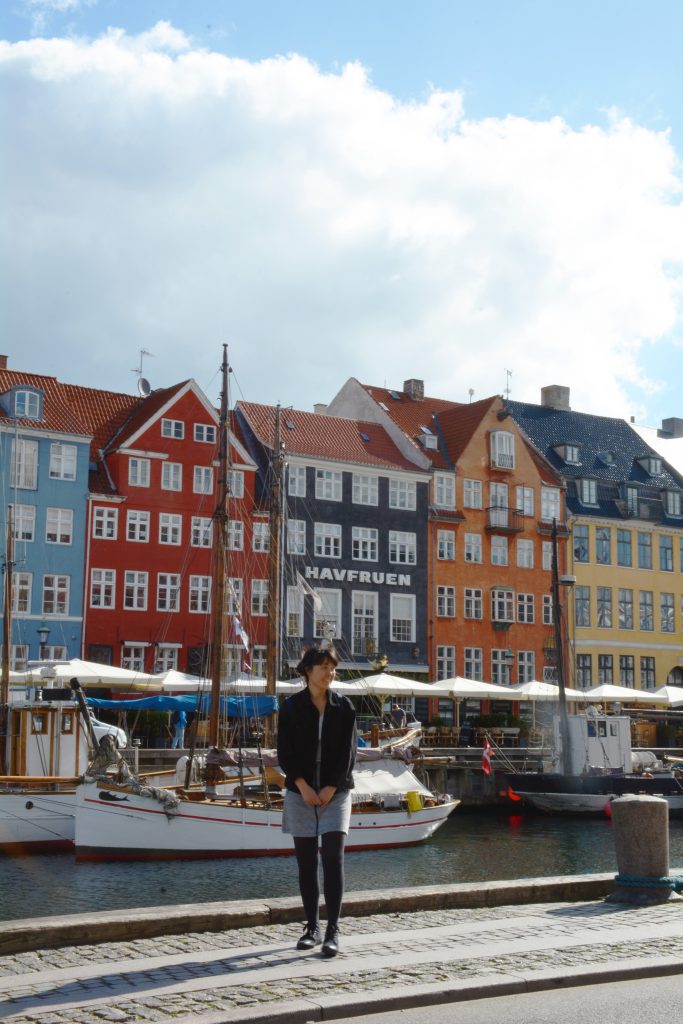 Finally got to see the iconic colorful houses in Copenhagen! 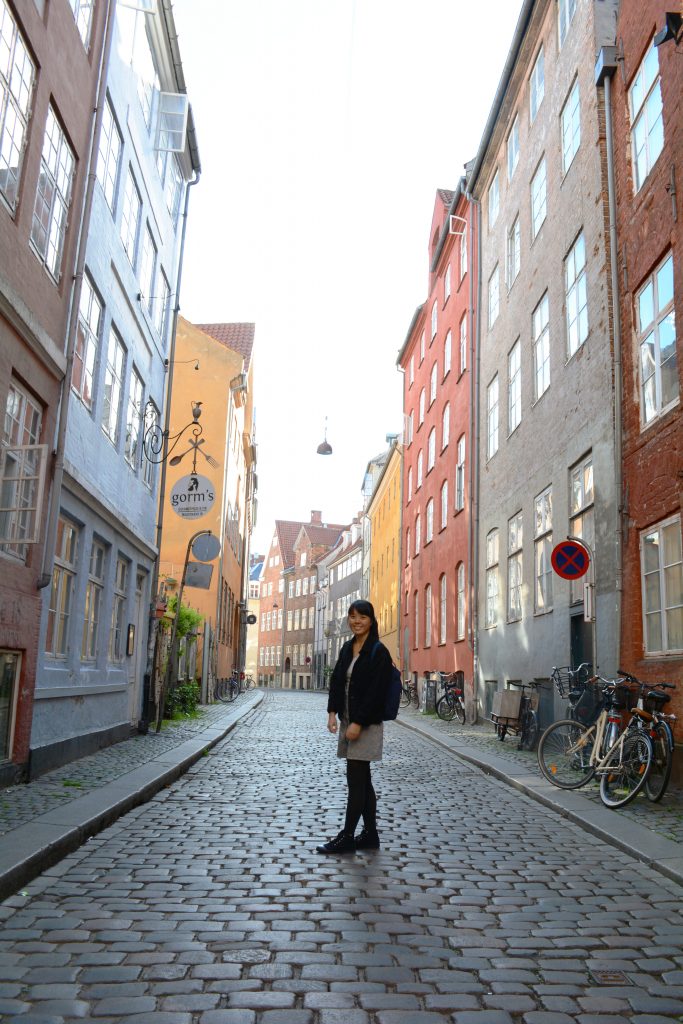 11. Walking on a frozen Lake Twentytwo in Washington
During the winter time, we visited Seattle, Washington over a weekend. We spent one day exploring the city itself and then took a little trip to northeast to Lake Twentytwo. The hike was around 7 miles and took a few hours, but the destination was beautiful. Some parts of the lake were completely frozen and then mountain behind it was covered in snow. We enjoyed our CLIF bars, chocolate, and nuts while playing the snow and ice. 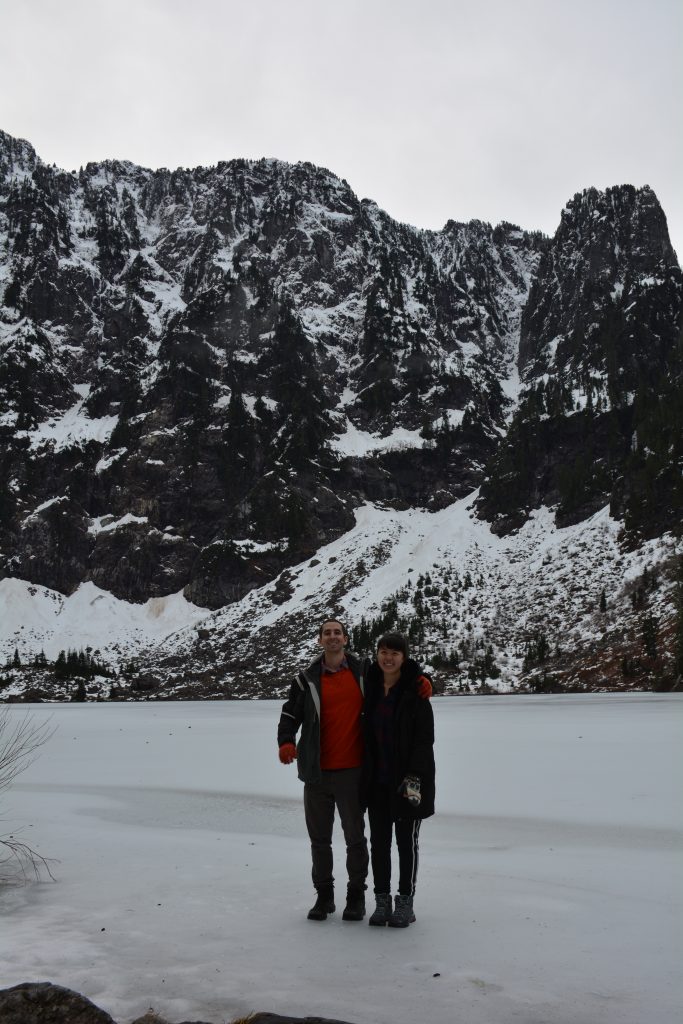 Dust and Bel on the frozen lake 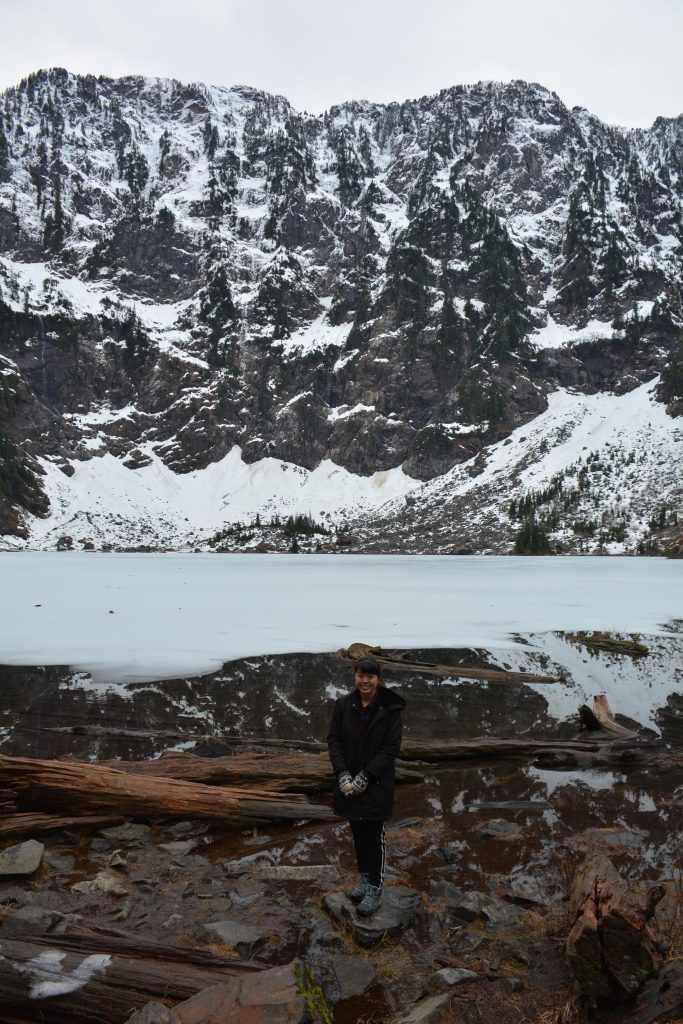 12. Exploring Alabama Hills, California (Mars on planet Earth)
Alabama Hills is the most amazing thing I’ve seen in California so far. I knew this place was beautiful from the pictures, but I had no idea that I would be wowed. Alabama Hills is next to Lone Pine, California and the East Sierra Mountains. The rock formations there are incredible. Although I haven’t been on another planet, this place felt like another planet. I felt like I was in a place where dinosaurs roamed. We enjoyed climbing the many rocks, finding rocks in interesting shapes, and taking in the snowy Sierra mountains. 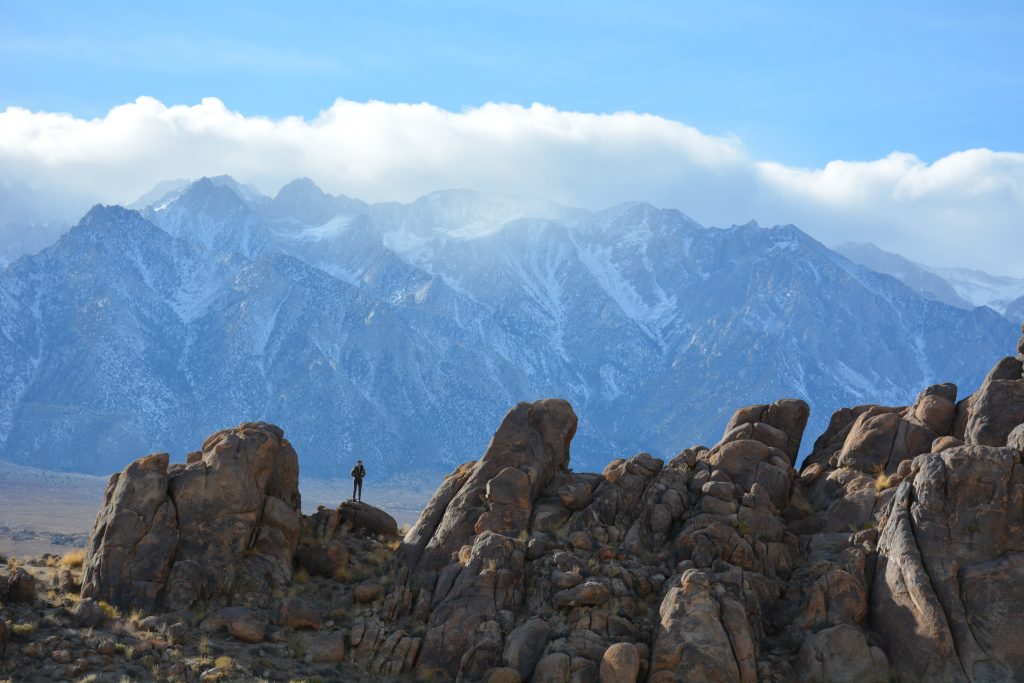 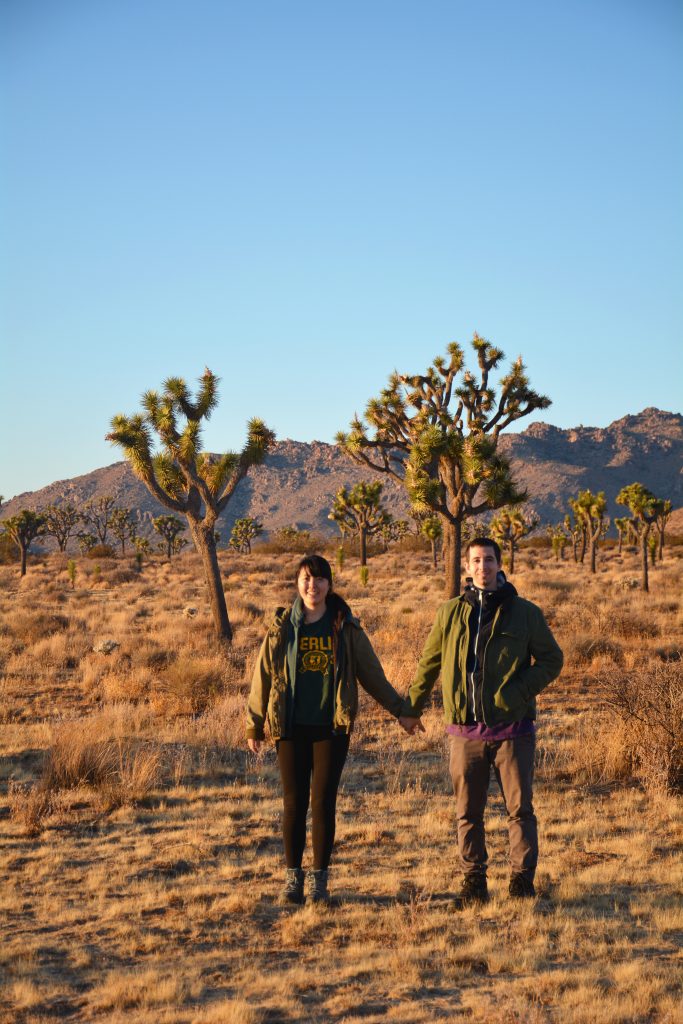 Running around the desert 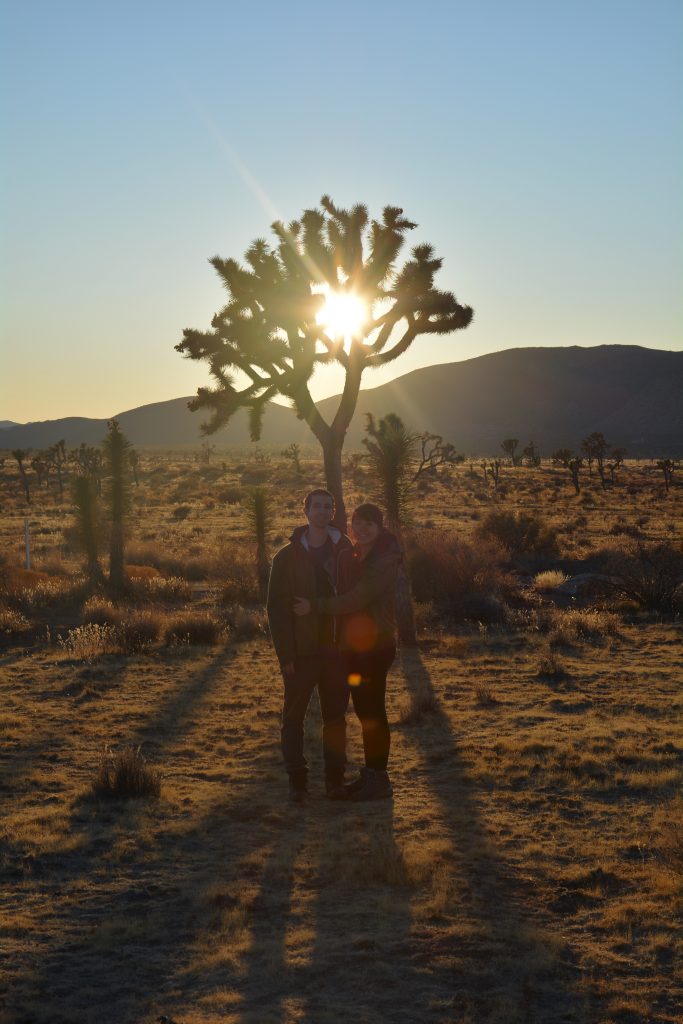 14. Climbing through the Cu Chi Tunnels in Vietnam
My first time to Vietnam was this year. We visited Ho Chi Minh City for a few days during Christmas and drove a couple hours to Cu Chi Tunnels. There is so much history in this place and incredibly interesting to see the tunnels the built in person. We even got the chance to climb into the tunnels. 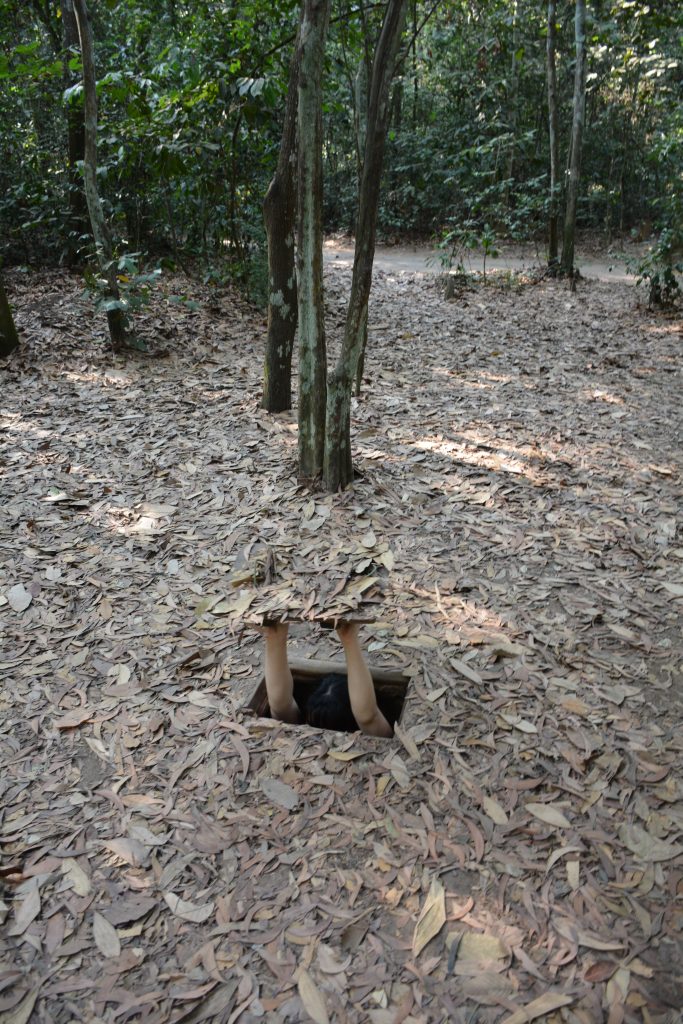 15. Getting engaged at Taft Point in Yosemite National Park during sunrise <3
Dustin bought the ring in March 2019 and then was going to propose in Switzerland and then in Banff National Park, Canada, but didn’t feel like the moment was perfect. He waited until September when we went to Yosemite National Park, which is a place we’ve been wanting to go to for a while. We had been waiting until it was summer to go. We started driving at night and arrived to Yosemite National Park past one in the morning. We took a quick shower and slept a few hours before we woke up to catch the sunrise. We drove and hiked to Taft Point in the dark. When the sun started to rise, Dustin proposed! Yay – we’re engaged! 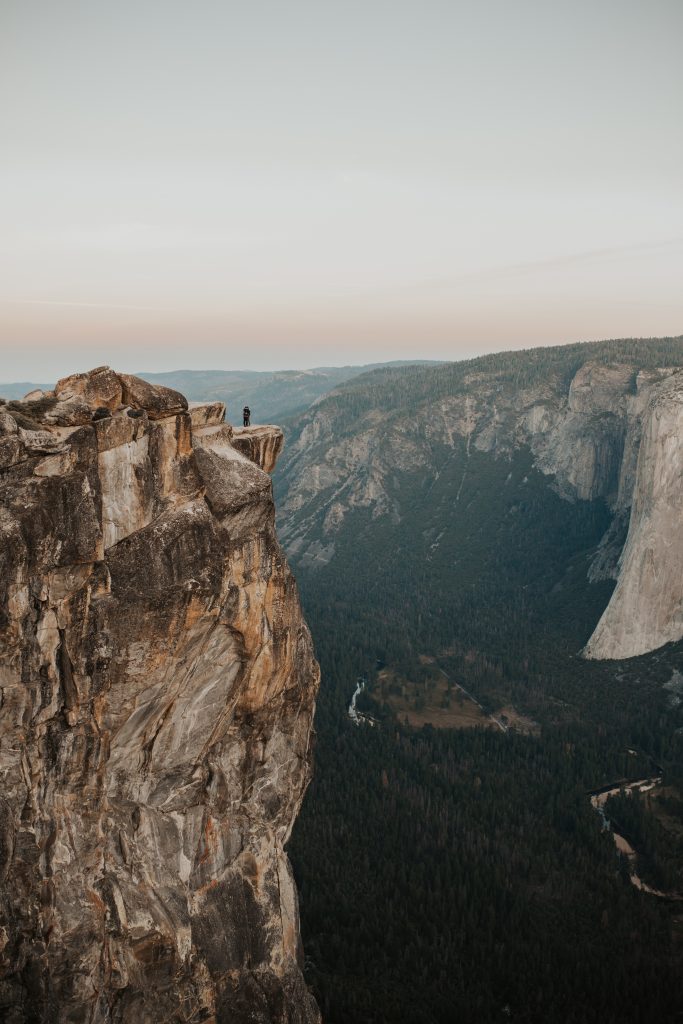